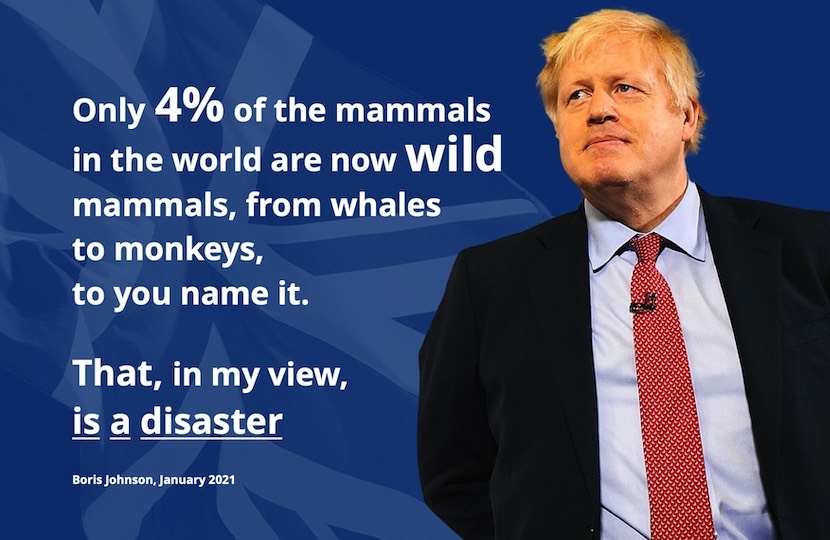 Speaking at the One Planet Summit today, Prime Minister Boris Johnson has given his strongest signal yet the the Government intends to redress the balance between factory farming and wildlife, which is in sharp decline in the UK and around the world.

The full text of the speech is as follows:-

After all, we’re making a lot of progress as humanity in finding the technological solutions to tackle climate change and reduce carbon. Clearly there’s a huge amount still to do but we’re starting to see a way forward since the Paris Summit five years ago which was I think a huge success, we can see that humanity can do this.

But the problem is that we are destroying species and habitat at an absolutely unconscionable rate. I think we’ve lost about 500 species in the last century, of all the mammals in the world – the biomass of mammals – I think I’m right in saying that 96% of mammals on our planet are now human beings or oxen or pigs or the livestock that human beings rely on. 70% of all the birds in the world are chickens.

In other words, there has been a total or near-total destruction of wildlife. Only 4% of the mammals in the world are now wild mammals, from whales to monkeys, to you name it.

That in my view is a disaster. We’re seeing a parallel loss of habitat, of forests and plant species of all kinds. So that’s why the UK is pledged to protect 30% of our land surface, 30% of our marine surface, to create marine protected areas – vast protected areas – which is something by the way an objective that we share very much with France, with Canada – we’re all engaged in this same effort.

And of the £11.6 billion that we’ve consecrated to climate finance initiatives, we’re putting £3 billion to protecting nature, whether it’s marine life, or timber conservation or sustainable food production.

I think that as global leaders, we must go further and I’m very pleased therefore that so many countries have signed up to the UN Leaders Pledge for Nature so that we have really hard-edged targets for the preservation of species and wildlife, but also the re-wilding of our planet in the way that Sir David Attenborough has suggested.

And I would like to see a world in which we give real meaning to those Aichi targets that were set so many years ago at Kyoto and I hope that our Chinese colleagues will be pushing that agenda at their Biodiversity Summit in Kunming. I know that we will be working with colleagues under the auspices of the UN to do that at the COP26 summit in Glasgow.

Obviously it’s right to focus on climate change, obviously it’s right to cut CO2 emissions, but we won’t achieve a real balance with our planet unless we protect nature as well. One final thought, don’t forget that the coronavirus pandemic was the product of an imbalance in man’s relationship with the natural world.

Like the original plague which struck the Greeks I seem to remember in book one of the Iliad, it is a zoonotic disease. It originates from bats or pangolins, from the demented belief that if you grind up the scales of a pangolin you will somehow become more potent or whatever it is people believe, it originates from this collision between mankind and the natural world and we’ve got to stop it.

Budget 2021: The Chancellor's Speech in Full

Read and Watch the Chancellor's Budget announcement here in full. One year ago, we promised the British people we would do whatever it takes to provide security and stability.